skip to main | skip to sidebar

So, Sunday night before school started, we realized that last year's lunch bag, was just not going to magically materialize like we had hoped - it's in one of those "kitchen" labeled boxes I know it is!
Anyway, my little one finally agreed that I could make her one like her big sister's. They are both made from denim - the blue one is my oldest's and I made it from an Old Navy spaghetti strap dress - this will be it's 3rd year, so it's holding up nicely! The black/gray one is the newest one and is from the brother's outgrown jeans and a dress that had seen better days. 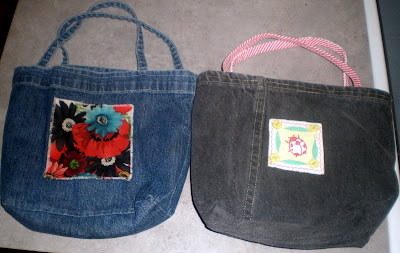 I used the bias trim from the sleeves of the dress for the straps and the jeans leg for the body of the bag. The ladybug and buttons were from the front of the dress - I had just cut off the buttons 2 days before to recycle them and thrown the dress away - I was lucky that my sewing scraps hadn't been discarded yet! 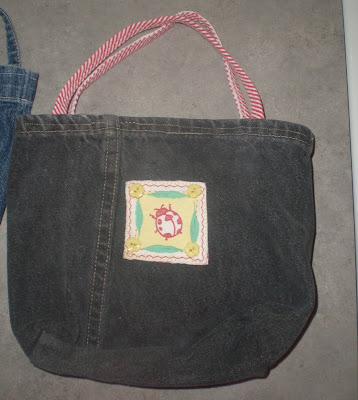 I used the skirt of the dress to make a lining and pocket (for the icepack) and the snaps of the jeans to keep the bag closed. My hand-sewing could have been better, but I only had an hour till bedtime and my little one wanted to make sure she had a lunch bag! 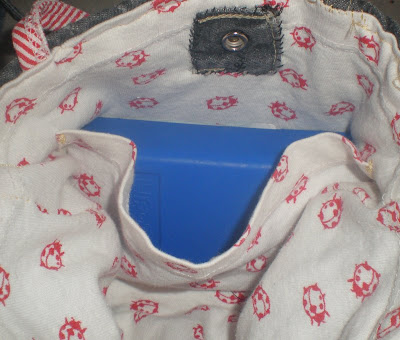 I made fabric "baggies" last year, but the crumbs would catch in the velcro and peanut butter and jelly made them kind of yucky. Maybe I should try that fake oilcloth fabric and just flip the tops of the bags over?
Posted by Cottage In The Sun at 2:40 PM

Those are adorable and so much better for your sweet little cherubs. Especially if you continue to forgo the plastic bags. Your such an awesome mommy!

Those are adorable and I bet very sturdy too!

Cottage In The Sun
South Texas
I love vintage items! Just imagining the history behind an item makes me smile. I reuse everything. My Papa's old chair is my sewing chair, my Gramma's 1920s valentines are framed art, and my Great-grandmother's ruffly pillowcase is a valance in my daughter's room. And those are just my favorite things - I have way more!